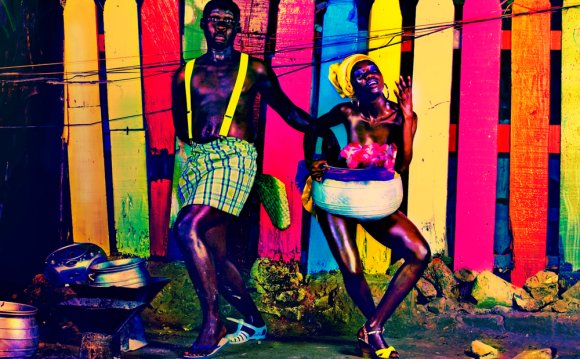 "We came in as a pop-up last year trying to see if there was a market for us, " director Touria El Glaoui told artnet News in a phone interview. Based on 2015's inaugural success, the fair, which will take place at in Brooklyn from May 6–8, will be even more robust in its second year in New York, with a carefully-curated selection of 17 galleries.

In its Brooklyn edition, it can afford to be choosy. Unlike the original London fair, which was founded in 2013 and accepts applications, 1:54 New York is strictly invitation-only. The fair takes its name from the 54 countries in Africa, and does its best to be fully-representative of the continent. To that end, the 60 artists featured in this year's fair hail from an impressive 25 countries.

"We are filling this void in New York, where contemporary African artists are not as well-represented as the rest of the world's artists, " said El Glaoui.

Julie Taylor, founder and director of online South African gallery, sees 1:54 as a sign of positive change. "African art is perhaps 'becoming ordinary, '" she told artnet News in an e-mail. "If 'ordinary' equates to securing the independence, recognition, and respect that African art professionals have long sought, then African contemporary art is certainly much closer to coming of age."

Pioneer Works has offered a slot in its artists residency program to 1:54 artist Omar Victor Diop, whose showing at Paris's Magnin-A gallery was one of the standouts of the 2015 edition, according to El Glaoui. "He's quite an interesting photographer and he has done this amazing series of important Africans in history, " she said.

This year, over half of the roster is new at the fair, with just eight returning galleries from the inaugural New York run. Of the additions, five have previously shown with 1:54 in London, while four, including New York's Richard Taittinger Gallery and Milan's Officine dell'Immagine, have never participated in the fair on either side of the Atlantic.

Although 1:54 purposely varied its New York slate of dealers in order to provide exposure for a new group of artists, at least one gallery isn't back for a reason. Arabella Bennett, founder of Cape Town's blamed "the depreciating South African rand" for her decision not to show in 2016, telling artnet News in a phone conversation that while "we enjoyed ourselves very much… it's a very expensive fair for the number of sales that we made."

Despite its small scale, the fair's international scope is impressive, with galleries from South Africa, Italy, Kenya, Switzerland, the US, France, Côte d'Ivoire, Spain, and the UK. Programming, curated by Koyo Kouoh, of Daka'r RAW Material Company, will include a lecture series and panel discussions.

See the full list of participating galleries and artists below: