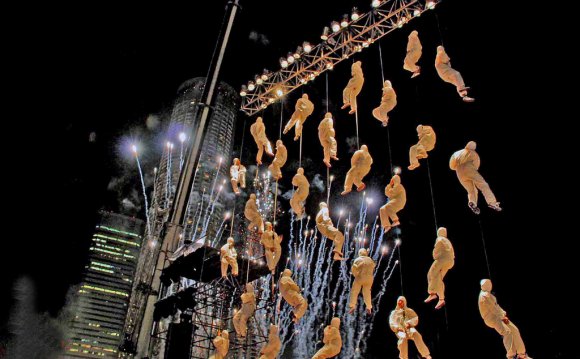 Dreams In Flight at the festival opening in 2007

The Singapore Arts Festival (Chinese: 新加坡艺术节) is an annual arts festival held in Singapore. Organised by the National Arts Council, it is one of the most significant events in the regional arts scene. The festival, usually held in mid-year for a stretch of one month, incorporates theatre arts, dance, music and visual arts, among other possibilities. Besides local participants, approximately 70% of the events are put up by international artists.

Today, the Singapore Arts Festival has become an international showcase with a distinctive Asian flavour, known for its bold and innovative collaborations at the cutting-edge of contemporary arts.

The Singapore Arts Festival started in 1977 as a national arts festival to celebrate local arts from the diverse communities in Singapore. Over the last three decades, the Festival has played a symbiotic and catalytic role in the development of the artistic and cultural life of Singapore. It has helped to transform the city’s cultural landscape, turning it into one of Asia’s major cultural capitals today. It has influenced local artists as well as increasing public awareness and demand for the arts, spawning new cultural platforms, events, and movements that help underpin the lively cultural scene in present Singapore. It was formed in 1999 when the existing Festival of Asian Performing Arts and the Festival of Arts were merged as an annual event.

The Singapore Arts Festival focused on water in 2008, with both the opening and closing shows being performed on water.

The 2010s theme, Between You and Me, was all about getting closer to the arts. For the first time, the Festival will actively reach out to everyone through an outreach programme called com.mune. Together with a stellar showcase of international performances, the Festival will truly touch you in ways you never imagined possible.

Singapore Arts Festival 2011 will be held from 13 May to 5 June 2011 and its theme is 'I Want To Remember'. The opening show will be When a Gray Taiwanese Cow Stretched, by Ishinha. About the migration of people from the South Sea islands to South East Asia, Taiwan and Japan, it will be Singapore Arts Festival’s largest-ever outdoor performance at the Esplanade Park.