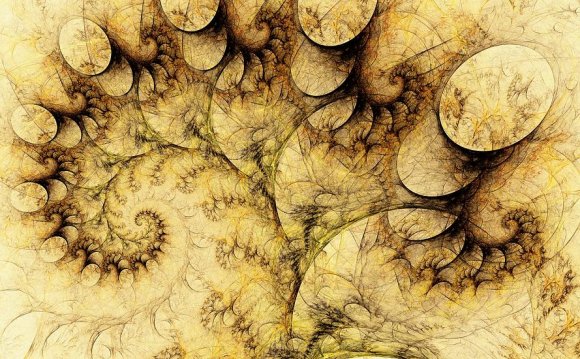 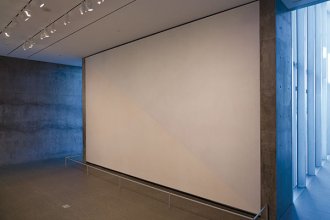 “When an artist uses a conceptual form of art, it means that all the planning and decisions are made beforehand and the execution is a perfunctory affair. The idea becomes the machine that makes the art.”

The Modern’s new acquisition Wall Drawing #50 A, 1970, by Sol LeWitt, is a destination for some museum visitors and an amazing discovery for others. Recently it has been the subject of several Museum programs. The most recent Sundays with the Modern, a monthly public tour by area artists and other art scholars, was led by art historian and independent curator Anne Lawrence. Lawrence focused on two pieces for her tour, Dan Flavin’s untitled (for you Leo, in long respect and affection) 4, 1978 and LeWitt’s Wall Drawing #50 A. She gave her audience a little background on both artists and the art movements minimalism and conceptualism, of which LeWitt was both a participant and a pioneer with his groundbreaking 1967 article in Artforum magazine, “Paragraphs on Conceptual Art.”

In addition to Sundays with the Modern, the 9- to 11-year-old campers of this summer’s Art Camp at the Modern, under the direction of Dallas artist Sally Glass, spent time on Thursday considering LeWitt’s concept that “the idea becomes the machine that makes the art.” They studied Wall Drawing #50 A as the manifestation of the artist’s written instructions and wrote their own set of instructions to be followed and made into drawings by their fellow campers

LeWitt began his wall drawings in 1968. These revolutionary works grew out of the artist’s commitment to minimalism with system-based, serial sculptures such as his signature white open cubes. With these pieces, LeWitt ultimately reduced the most minimalist of forms, the cube, into an open grid using a system in which the basic element of the cube, a square, is repeated until it arrives at the form from which it is taken. This reductive approach led him to focus on art’s most primal source, the idea, as addressed in his essays “Paragraphs on Conceptual Art” and “Sentences on Conceptual Art” published in 0 to 9 and Art-Language in 1969. 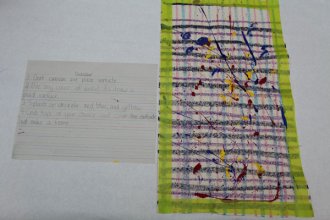 With the wall drawings, LeWitt wanted a work of art that was as two-dimensional as possible and felt that working directly on the wall was more natural than creating a structure (such as canvas) to paint or draw on that is then hung on the wall. He also acknowledged that using the wall was not as revolutionary as it might seem given prehistoric cave paintings and medieval frescos. Nevertheless, the faint color pencil lines of Wall Drawing #50 A challenge expectations as one encounters the piece in the somewhat private space it has been allotted at the Modern. In becoming one with the architecture, adhering to the wall rather than hanging on top of it, LeWitt’s monumental drawing has an ephemeral quality that seems a bit precarious when one considers what happens to this meticulously rendered, labor-intensive drawing if it has to be deinstalled to make room for other works or to go on loan, which is often the case for art in a museum. Rather than being taken down and stored and protected in the vault, the piece as it is currently installed at the Modern would be painted over and, thus, destroyed.

To my mind, this vulnerability adds to the work’s beauty and my relationship with it. I sense the care that went into its execution when I move in close to examine the tight network of lines and the optical creation of color. I am intrigued at how it appears and disappears as I move through the space it occupies and how such delicate, quivering marks and faint colors can hold an entire gallery. As someone who is interested in the history and development of ideas in art, I appreciate its contribution to the way in which we perceive, find meaning, and experience images and space. I value my time with Wall Drawing #50 A, taking it in more carefully and fully as if it might disappear. There is also the democracy with which LeWitt has imbued his work that endears me to it. In its absolute abstraction and lack of hierarchy (it is comprised of thousands of parallel and crossing lines), I sense that my perception is as valuable and valid as the artist’s intent. It is also interesting to note that this work does not require the hand of the artist. Rather, it consists of seemingly simple instructions which are executed at any point in time (in this case after LeWitt’s death) and in different locations by studio assistants and museum staff. Of course this results in different iterations with each execution. No two installations of the same instructions could possibly be identical, which speaks to the humanness and uniqueness within systems.