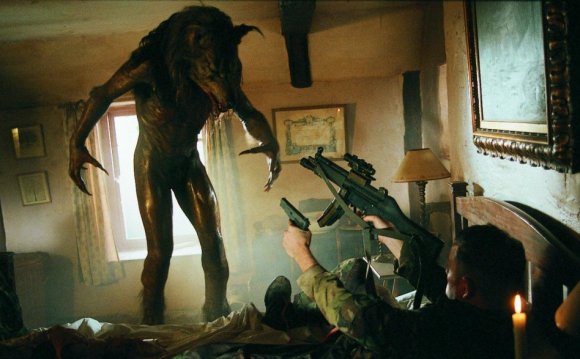 Would you willingly spend two hours with a sadistic serial killer? Thousands of Australians have.

The film Wolf Creek 2, featuring an outback murderer who sadistically dispatches almost everyone who crosses his path, slaughtered its box office opposition on its opening weekend and took $4.6 million in its first five weeks.

While some people cannot bear to watch anything remotely frightening, plenty love nothing more than to sit in the dark and be scared witless.

When The Exorcist hit cinema screens in 1973, audience members fainted, threw up, went into hysterics or fled the theatre. With figures adjusted for inflation, it ranks as the ninth-highest grossing film of all time. This year, a fifth sequel in the so-called ''found footage'' Paranormal Activity series is coming and a bigger-budget remake of the 1982 horror classic Poltergeist; along with a seemingly endless parade of post-Twilight vampires (Only Lovers Left Alive starring Tilda Swinton, pictured), Nazi zombies (Dead Snow), haunted houses (Oculus), cannibals (The Green Inferno) and psychopaths (Deliver us from Evil) lurking behind.

The enduring popularity - and profitability - of horror movies shows a good chunk of the cinema-going audience craves chills, thrills and kills. Why?

Bill Thompson, professor of psychology at Macquarie University, says fear is something we instinctively seek out as part of our development.

Horror films allow viewers to experience ''a visceral response mixed with an intellectual understanding that there's no genuine threat'', he says.

Many also tap into our ingrained fear of being hunted and devoured. ''We're still living with the genes we inherited from our ancestors, '' he says.

''Horror films intuitively link into that and that's what's so brilliant about them. The fear of a large animal consuming us; [films] like Alien or Jaws … those play into something that is very deep-seated in our evolutionary history.''

Watching a scary movie also has its biological rewards. The build-up of tension, followed by resolution, is ''essentially playing with our neurochemical systems. We get this tension and we've got all this adrenaline and when the reward system comes, other neurochemicals like dopamine flood through different parts of the brain and let us know that it's OK, '' Thompson says. ''It's like a high, in effect.''

Researchers at Brigham Young University in the US categorised the personalities of horror fans - viewers who love the gore and the shocks, ''detectives'' who like to stay one step ahead of the killer, and ''white knucklers'' who consider the excitement and adrenaline rush they get while watching a pay-off for the physical stress, even nightmares, they experience.

Dr Bruce Isaacs, a lecturer in art history and film studies at the University of Sydney, agrees that the buzz is part of horror's appeal. ''Audiences expect a rush from horror cinema, '' he says.

''The horror film seems to me special in its capacity to allow audiences to explore complex and quite powerful fantasy lives … Horror films can engage especially primal fantasies, and situate us in lives that are otherwise considered deviant and transgressive.''