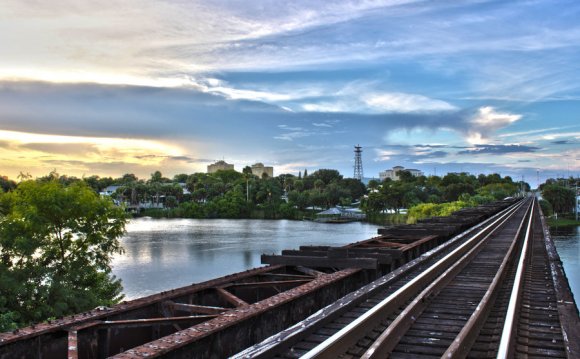 Downtown Melbourne isn't just a downtown for Melbourne but is also a central business district for the entire metropolitan area stretching from Titusville to the north to Palm Bay to the south. Numerous restaurants and shops serve the professionals working for the many high tech industries in the area—including Kennedy Space Center of course. Melbourne also boasts a high number of night clubs and lounges for a town its size—just one of the many examples of the city's cosmopolitan flavor.

Another example is the small skyline of scattered high-rise condos and offices. Although just a few now, many more are planned. Some resident's are worried about Melbourne turning into a West Palm Beach, with its high-density and congestion. But that day may not come any time soon, especially with the recent recession slowing down redevelopment efforts.

Until that day, the city still has plenty to offer. East New Haven Avenue is Melbourne's Main Street, particularly the 700, 800, and 900 blocks. But a lot's packed into those three blocks, including antique stores, clothing boutiques, restaurants, lounges, and coffee shops. Given Melbourne's coastal location, many stores sell all of the accessories, clothing, and supplies you'll need for a day at the beach. Wide sidewalks provide lots of room for pedestrians, dog walking and outdoor cafes. And the city itself is not too far from the beach, another plus.

The Flatiron Building was constructed shortly after the 1919 fire destroyed most of downtown Melbourne.

The downside is Melbourne's limited retail hours. With a few exceptions, most stores are closed evenings and Sundays. Maybe everyone's at the beach. But the city does have many unique stores (no chains) and upscale restaurants and a bustling nightlife—even in the evenings when at least the restaurants and clubs are hopping. And if you can't find the restaurant for you, keep heading east along U.S. 192 over the causeway until you get to Indialantic. There's a ton of restaurants there as well. Also, to the north of downtown Melbourne is the community of Eau Gallie. Once its own city, the community has maintained an independent image even after consolidating with the city of Melbourne. The Eau Gallie Arts District is home to several unique shops and restaurants.

Shopping hours are usually limited to Mondays through Saturdays during the day.

Plenty of free parking is available at one of the many lots throughout town. On street parking is also available but usually limited to three hours.

If you like this page, please check out the Main Streets we have listed in the states below!

The Melbourne Civic Theatre (817 East Strawbridge Avenue, 321-723-6935) is a community theater located in downtown Melbourne. Speaking of the arts, The Henegar Center (625 East New Haven Avenue, 321-723-8698) is a local cultural arts center where shows and other events are held.

Folks enjoy dining (and drinking) at one of Melbourne's many outdoor cafes.

If you want to enjoy the waterfront, take a walk on the boardwalk along Crane Creek, the southern border of downtown Melbourne. Speaking of water, don't forget the beach is just a couple miles to the east along U.S. 192.