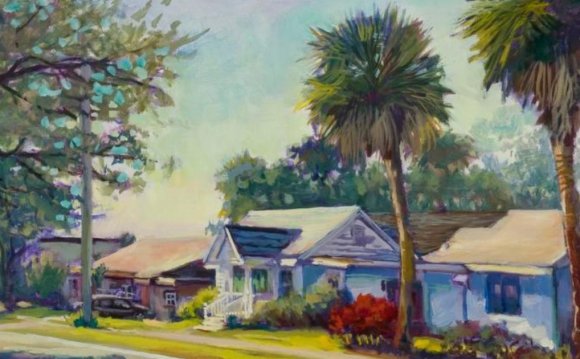 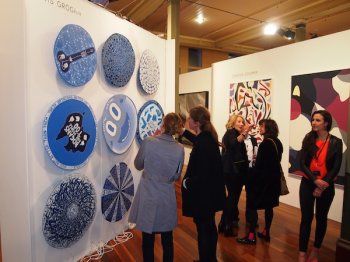 After a tough couple of years, the Melbourne Art Fair is getting back on its feet with a new director and an increase in sales and attendance. The fair opened in the Royal Exhibition Building on Wednesday evening with considerably more energy than the previous edition, and although sales haven't been quite stratospheric, and are unlikely to surpass the $12 million achieved prior to the 2008 global financial crisis, dealers and artists are thrilled with the general mood.

The 2012 edition of the biennial fair was not the strongest, with sales still depressed by the lingering effects of the financial crisis and dealers uncertain about the direction of the fair.

The appointment of Art Fairs Australia's Barry Keldoulis to direct the 2014 edition has answered one of these concerns. Keldoulis, a former dealer, earned his stripes directing the inaugural Sydney Contemporary art fair in 2013, and since taking on the Melbourne fair he has been active in securing the support of previous exhibitors. He's also been taking the time to discuss and develop the proposals of first-timers, like New Zealand's Paulnache, which staged an excellent site-specific solo show by the abstract painter Peter Adsett.

Keldoulis's revamped floor plan, which has opened up the ground floor to introduce more space and new pathways through the booths, has been a particular success according to Adelaide gallerist Paul Greenaway, who counted the event as his 70th art fair.

But while the sentiment among dealers was definitely optimistic in the lead-up to the fair, it was telling that only a handful brought large-scale pieces. Most kept their presentations within more affordable price ranges and the strategy appeared to pay off. Early in the vernissage, the magic price appeared to be AUD, 000. It's no surprise that affordable pieces should prove popular, but perhaps not usually to this extent.

Fortunately sales above the magic number did come through for some.

Sydney dealer Joanna Strumpf of Sullivan+Strumpf reported several successes for Sam Leach, who presented both paintings and sculptures. "Quite a lot happened in the first half hour and then it was just steady after that, " she said about the vernissage. “We were thrilled with last night." Large paintings by Leach sold for just under AUD$50, 000, with smaller pieces between AUD$20, 000 and $30, 000.

Sydney's Watters Gallery, which is marking its 50th anniversary this year with a series of exhibitions featuring artists involved in the gallery's history, took major pieces by Richard Larter, Paul Selwood, and Ken Whisson, whose 1975 work Two Aeroplanes and One or Two Birds sold for AUD, 000 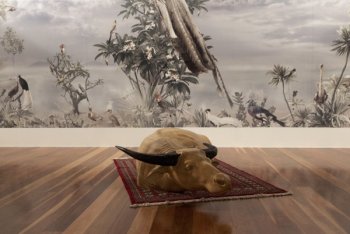 Roslyn Oxley9 Gallery's Cassandra Bird would only say the gallery was "extremely delighted" with initial sales. The Sydney gallery presented a major new work by David Noonan alongside a work on paper by Yirrkala artist Nyapanyapa Yunupingu, as well the last remaining piece in a suite of works by James Angus that was recently exhibited at the Biennale of Sydney.

Oxley is committed to the idea of group showings at art fairs, giving each artist their own wall and hanging them in a way to encourage conversations between the pieces. The presentation stood out because of these connections but also because there were so few other galleries taking work at this level. Two large works by Isaac Julien provided the backbone to the gallery's exhibition.

At the more affordable end of the spectrum, Melbourne's William Mora Galleries had huge success with Brian Martin's Methexical Countryscapes, selling seven of the large-scale charcoal drawings of trees for just under AUD$11, 000 each.

Greenaway, who runs Greenaway Art Gallery in Adelaide and GAGPROJECTS in Berlin, placed an impressive large-scale Juz Kitson installation with a new collector for AUD$11, 000. Kitson, who spends half the year in China, where she is better able to develop her ceramics, blends porcelain with furs and textiles and skeletal forms to create powerfully moving works about decay and decomposition.

Ceramics have been everywhere this year, and Martin Browne Contemporary's exhibition of Peter Cooley's earthenware kangaroos have been immensely popular. At the end of the first day, the Sydney dealer had sold all but one of the 16 pieces, with the larger works selling around the AUD$8, 500 mark.

Browne also had success with Fiona Lowry, the recent winner of the Archibald prize, selling two large canvases, one for AUD$28, 000. Baden Pailthorpe, the young video artist in the Browne stable, sold a double-channel work for AUD$18, 000, about three times the asking price for his work only two or three years ago.