What is a MIFF? 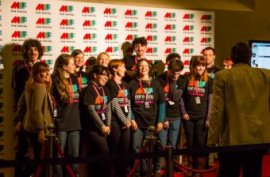 How many years have you been a MIFF vollie?

I’ve been a MIFF volunteer for three years and will probably volunteer next year as well.

What is your favourite part of being a MIFF vollie?

MIFF is a fun environment to be in. I also enjoy the celebrity spotting; I keep my eyes peeled for my heroes Margaret and David. But it’s the meeting new people and engaging in film that makes the festival so inspiring.

What is the most frequently asked question by MIFF patrons?

“Is that the queue?” I understand where patrons are coming from; it can be a drag queuing but in the end there is a seat for everyone! Ultimately us friendly MIFF vollies are pretty good at getting queues sorted, so don’t worry!

Favourite venue and why?

What are you most looking forward to in MIFF 2014?

I’m a bit of a horror enthusiast, so I plan on seeing some of the haunted Hong Kong pieces. It’s going to be a hell of a night catching Rigor Mortis (Fri 15 Aug at 6.45pm) and then running to Mr Vampire (Fri 15 Aug at 9pm).

Rigor Mortis is a new supernatural horror co-produced by Takashi Shimizu (The Grudge) with the original cast members of Mr Vampire. I also look forward to the Night Shift selections – nothing screams atmosphere more than seeing a horror film late at night.

Anand Patwardhan On Why He Is A Failure - MIFF Lifetime ...