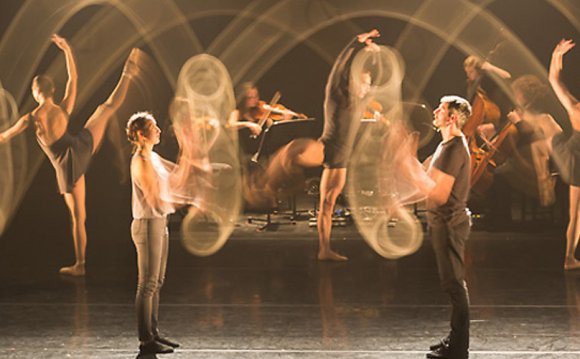 I’d been promised overlapping voices and there were moments when the music of one choir did give way to the singing of the next, but the effect could have been heightened had they not been so far apart, and in two cases tucked round the corners of the market place. “Organised cacophony” is what Betteridge had hoped to create but it would have been more cacophonous had they been grouped within easier earshot of one another.

Unusually for a Friday evening, the town centre was no longer the domain of young pub-goers, but that didn’t stop one youthful driver tooting his horn as he passed a choir dressed in aprons. “Everything must go, ” exhorted one singer, now calling rather than singing. “Get your free-range chicken! Only a fiver, ” cried another. “Best meat on the bone, ” proclaimed a third.

Eventually, after 40 minutes of near constant singing, the four choirs left their corners to converge on the centre of the square. The evening sun even emerged to catch the buildings with a golden glow. “Come on ladies, one pound.” Market Place was filling with trading calls. “Gather round, ” they sang. “Let me tell you a story.” For the finale, writer David Haworth had created a script based on interviews with today’s stall-holders that asked them to comment on the current state of Salisbury’s market trade. The choirs sang of the heart being ripped out of the market and a drum struck out before dusk fell.

“Breathe in that market air, ” they sang at the end, as they spread out again and faded back into the corners of the market. There was a beauty and a sadness to the disappearing voices. Butcher Row, Fish Row and Silver Street may have retained their old trading names, but the market is no longer quite so central to the city.

The theme of this year’s festival lies not in Market Place at all, but to the east. Director Toby Smith has devised a four-year plan which began last May. Inspired by the proximity of Stonehenge - “just up the valley” - and its relationship with the sun, he decided to trace its passage from north, east, south to west. Last year looked north to the Scandinavian lands, this year looks towards the Middle East and its artistic traditions. Rarely, he says, are we given the chance to focus on the positive stories of its rich cultural heritage given the news cycle “with which we’re all too familiar”.

Much later in the fortnight, Salisbury will welcome Trio Joubran, Palestinian oud (or Arabic lute) players and on the second evening Mor Karbasi brought her Sephardic Jewish repertoire to the Cathedral. Born in Jerusalem to a mother from Nazareth of Moroccan descent and a father from Jerusalem of Persian ancestry, her inspirations span from northern Europe via Africa to Asia.

At first, Karbasi’s group of five, dwarfed by the Cathedral’s magnificence, didn’t seem to fill the enormous space, but it became possible to lose yourself in the mellifluousness of her voice. Her body pulsed with the music, the spirit of what she was singing inhabiting her as she moved rhythmically to its melodies. There was an urgency at times to the sound that seemed to evoke the troubles that have left so much of her region in turmoil.

There was also something touching about an Israeli singer bringing her Jewish music to one of the symbols of Anglicanism. Casting her dark flowing hair about her head, Karbasi drew me in to her world. The acoustics were brilliantly clear throughout, but when she returned alone for an encore, Karbasi began to click her fingers and stamp her feet and in those moments she seemed to fill the Cathedral.

Afterwards, Karbasi told me that it was inspiring to sing in the Cathedral and that she felt she was holding three religions in her voice. Her Sephardic Jewish music comes, she explained, from Christian Spain with many Arabic influences. The evening was a “spiritual experiment”.

Karbasi began singing - according to the story her mother told her - when she was just seven months old. “She heard me singing a lullaby that she sang to me, singing the melody and everything. I don’t know whether to believe her, ” she added.

• What's on at this year's Salisbury Festival

“It’s always been my way to let out my feelings. That’s the most important thing for me - to be able to release, because I feel so many things all the time. Sometimes when I sing I feel that I’m not here, I’m somewhere else.”

Her message is that “all the boundaries in the world are just in the mind”. Music, she said, “is the perfect example - it brings everyone together, everyone can enjoy and appreciate in the same way.” It is, she insisted, a powerful tool to bring people closer.