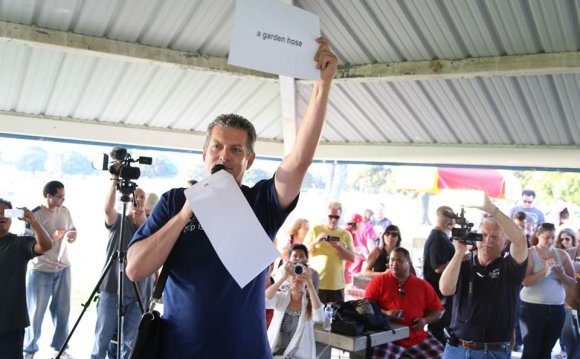 The 48HFP takes local filmmaking international! We are in 130 cities around the world, on 6 continents. What does this mean to the participants? If you win your city, you have entered the international arena. Filmmakers from each winning city are invited to screen their films at Filmapalooza – our end of year event, and the filmmakers meet (and party) at this filmmaking Olympic village as they compete for the international title of Best Film.

Our History How it all got started

In 2001, way back in the days even before flash drives and HD quality video, Mark Ruppert and Liz Langston were making short films. Mark came up with a crazy idea – to make a film in 48 hours! They tried it and found that it was not only possible – it was exhilarating. The big question back then was... Would films made in only 48 hours even be watchable? The answer was a resounding yes.

Now, over 30, 000 films later, the 48 Hour Film Project has become a rite of passage for filmmakers around the world.

Our Mission Our goals & what we strive to do

The 48 Hour Film Project's mission is to advance filmmaking and promote filmmakers. Through its festival/competition, the Project encourages filmmakers and would-be filmmakers to get out there and make movies.

The tight deadline of 48 hours puts the focus squarely on the filmmakers—emphasizing creativity and teamwork. While the time limit places an unusual restriction on the filmmakers, it is also liberating by putting an emphasis on doing instead of talking.

We've had about 30, 000 teams in the Project over the years, and at 13 people per team, that translates to roughly 394, 000 people who have answered the call to come on out and make a movie!

The Project has truly spread to the four corners of the globe. Filmmakers from Asia, Australia, Europe, the Middle East, Africa and the Americas will compete to see who can make the best short film in a weekend.

The 48HFP had it's start as a filmmaking experiment between friends. Who knew back then that it would grow to become a global phenomenon?!?

In the very first project ever, the required line was: I made you who you are, and I can just as easily break you.

Our smallest team has consisted of one person who sets up the camera then runs around to be on-camera.