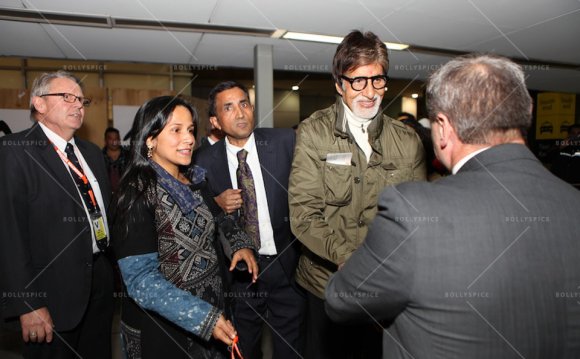 One of India’s most prominent designers, Anamika Khanna’s exclusive collections are worn by Bollywood A-listers including Kareena Kapoor and our very own Vidya Balan. She was one of the first two designers invited to show at Paris Fashion Week and the following year Sonam Kapoor made her catwalk debut for Khanna at India’s Couture Week. A Kingfisher Award winner for the Fashion Designer of the Year, she is also an Associate Design member of the Fashion Design Council of India.

One of the busiest actors and producers in India, Anil Kapoor has won most of the awards going since his screen debut in 1979. He is also one of India’s most recognisable actors on the global stage having starred in Slumdog Millionaire, Mission: Impossible – Ghost Protocol and the eighth season of 24. We are celebrating this powerhouse with screenings of his latest release, Dil Dhadakne Do, and his classics 1942 A Love Story and Mr India.

Her career reads like the script of a Bollywood movie and the unstoppable Elahe Hiptola is just getting going. In 1999 she set up the first designer fashion store in her home city of Hyderabad and now, as a producer, her creations include Iqbal, Dor, Lakshmi and the only Indian film accepted to this year’s Berlin film festival, the award winning Dhanak.

A red carpet favourite of the stars, Gaurav Gupta is one of India's most renowned couturiers. An alumnus of London's Central Saint Martin’s, he made his breakthrough early on at shows throughout Europe, Japan, Russia and India for his signature style; bridging the contradictory 'beauty with military, structure with fluid, fantasy with concrete.’ He opened his first Mumbai store last year.

His screen debut in 2008's Jaane Tu Ya Jaane Na won him the Filmfare Award for Best Male Debut and Aamir Khan’s dashing nephew has barely stopped since. As well as starring in hits such as I Hate Luv Storys, Delhi Belly, Mere Brother Ki Dulhan and Ek Main Aur Ekk Tu, Imran Khan is a committed social activist and a columnist for The Hindustan Times. Catch him next opposite Kangana Ranaut in Katti Batti.

The fearless Kangana Ranaut faced the wrath of her parents when she ditched medicine for acting. However her determination paid off when, at just 17 years old, she won the Filmfare Award for Best Female Debut. Since then her irresistible combination of outer charm and inner strength has seen her become a very modern screen hero to millions, not only for breaking female stereotypes on screen in roles like Queen but also for taking a stand on a range of social issues, such as skin-lightening products, off screen.

Vidya Balan At The Indian Film Festival Of Melbourne