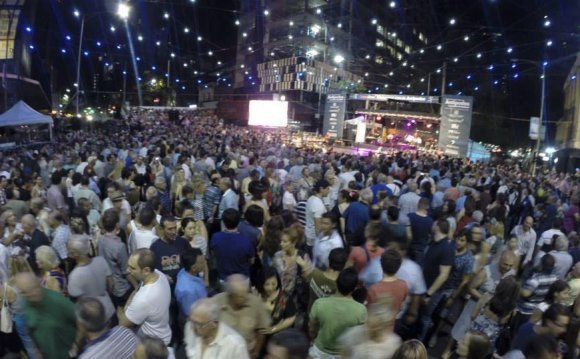 The Antipodes Festival extends far beyond the weekend of the Lonsdale Street Glendi. Browse the events on the left, and you’ll find just a little taste of what’s on offer this year. From the newly created Antipodes Writers Festival, to the foodie favourite Flavours of Greece, and everything in between.

The Antipodes Writers Festival celebrates Constantine Cavafy, one of the finest and most enigmatic poets of the 20th century.

5 June, 2013 – The Antipodes Writers Festival (AWF) is this year being dedicated to the work of CP Cavafy. Born within the once thriving Greek community in Alexandria of Egypt, Cavafy (April 29, 1863 – April 29, 1933) is regarded as one of the foremost modern Greek poets and one of the finest poets of the 20th century. He was instrumental in establishing modern Greek poetry on the international scene, where he is still being studied and translated into many languages well into the 21st century. 2013 marks the 150th anniversary of the renowned poet’s birth.

Cavafy gained the critical attention he deserved after his death in 1933. “His life was an enigma, but his poems about ancient Alexandria and his longings for a ‘Hellenic kind of pleasure’ offer insights into a passionate”, commented Duncan Spratt in his article ‘The naked civil servant’ for The Guardian.

The AWF weekend at The Wheeler Centre will see five international academics unravel some the multiple layers of his work. Speakers include George Syrimis (Yale University), Gregory Jusdanis (Ohio State University), Maria Boletsi (Leiden University), Karen Emmerich (University of Oregon) and Dimitris Papanikolaou (University of Oxford). Vrasidas Karalis from the University of Sydney will also take part in a session on Sunday 23 June, discussing the topic of ‘C.P. Cavafy as a moral thinker’.

A special addition to the weekend program will be a screening of The Barbarians, an immersive opera by Constantine Koukias inspired by the iconic poet and commissioned by the Museum of Old and New Art. Otherness is a central theme of Constantine Cavafy’s poem ‘Waiting for the Barbarians’; written in 1904, it is one of Cavafy’s most important works. The poem echoes the dramatic traditions of Ancient Greek Theatre and resonates with today’s eco-political environment.

George Syrimis is Associate Chair and Lecturer in Comparative Literature at Yale University, where he received his MA and PhD. His dissertation was on the poetics of C.P. Cavafy’s love poems. He has taught at Yale since 2001, and has been associate Program Chair of the Hellenic Studies since 2004. Aside from Cavafy, Dr Syrimis has also published articles on the oral tradition, Georgios Vizyenos, Cavafy, Mikis Theodorakis, and Nikos Kazantzakis. He has a new volume forthcoming on “Julian the Apostate in the work of Constantine Cavafy and Nikos Kazantzakis”.