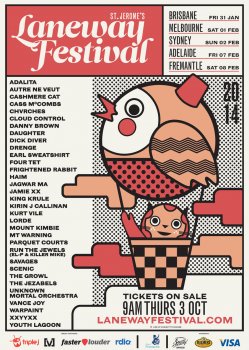 Programming director and co-­founder Danny Rogers says: ‘We’re exceptionally proud of this year’s line­-up. As usual, the artists have been chosen on the strength of their music and their ability to deliver an insanely great live show. It’s why we couldn’t resist bringing a few international acts back and it’s why we are so thrilled to introduce you to some of the most exciting new artists this side of the world has seen for the very first time. This country has so many incredibly talented artists; if only we could bring them all along.’

As previously announced, the 2014 event will introduce a bunch of new changes and improvements to all of the sites. Quality food, unmatched locations, and an impressive exhibition of local art: it’s going to be unreal.

**Exclusive to Laneway: no sideshows