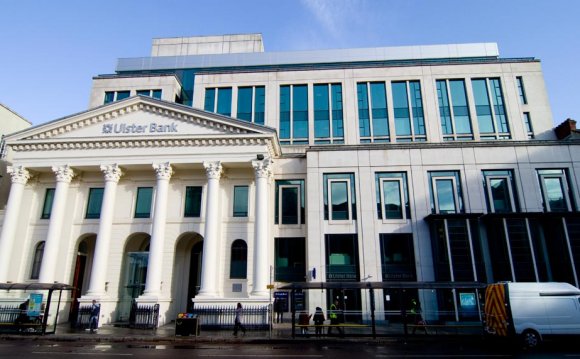 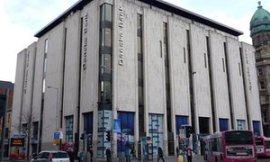 The building in Donegall Square West, Belfast, is a classic example of 1970s brutalist architecture. It is now occupied by Danske Bank. Photograph: Department of the Environment/PA

A bank in Belfast where one of the biggest cash robberies in British or Irish criminal history took place has been listed as a building of historic and architectural interest.

Now the main office of the Danish-owned Danske Bank, the building in Donegall Square West facing Belfast city hall was the scene of a daring heist in which the robbers walked away with £26.5m just before Christmas in 2004.

Justifying the bank’s inclusion among 19 newly listed buildings around Belfast, the DoE described the six- storey structure built in 1972 as “a bold exercise in mid 20th-century modernism with a pronounced vertical emphasis. Much historic fabric and detailing survive. The restrained design is reinforced by the quality of the natural stone cladding contrasting with the brown aluminium glazing and presents one of the strongest expressions of 1970s architecture in the city of Belfast.”

Among the other buildings listed is the 19th-century headquarters of the Belfast Telegraph in Royal Avenue. The announcement that the newspaper office and printing centre was to be listed came in the same week that its owners revealed it is moving out of the location with the loss of 89 jobs.

The Northern Bank robbers forced two bank workers, whose families were being held hostage at the time, to stuff holdalls and black bin liners with millions of pounds from the vaults on 20 December 2004.

As the hunt for the gang stretched into weeks, then months, the Police Service of Northern Ireland (PSNI) - along with the British and Irish governments – claimed the IRA was involved.

Sir Hugh Orde, the then chief constable of the PSNI, issued an interim report blaming the IRA. He strongly denied the report was published because of political pressure.

Sinn Féin insisted the IRA had not carried out the robbery and party officials had not known of or sanctioned it. Amid the prolonged political slanging match, which threatened to derail the Northern Ireland peace process, there was not enough evidence to prove the involvement of any single group.

The only conviction relating to the heist was of an Irish businessman, Ted Cunningham, who in 2009 was found guilty of laundering more than £3m connected with the robbery.

Police recovered £2m, including £60, 000 of Northern Bank notes, during raids in Cork and Dublin. About $100, 000 in US banknotes was found in the toilet of the police athletics association’s Newforge country club.

Organisers of historic tours around Belfast, which include sights of interest from the Troubles, said they often took visitors to the bank building because of its link to the robbery.

Billy Scott, who runs the Black Cab Tour company, said that when he has Australians on his tour he always makes sure he includes a visit to the building.

“The Aussies are always particularly interested in the bank because at the time of the robbery it used to be owned by the National Australia Bank. For some reason they find the whole thing very humorous. It’s hardly a lovely building to look at compared to the city hall across the road or some of the older buildings nearby, but it is part of our Troubles’ history, ” Scott said.

The bank’s current owner, Danske, is apparently not so keen on the building’s historic nature. Back in May, the Danish bank raised objections with Belfast city council over the potential for their HQ to be listed.