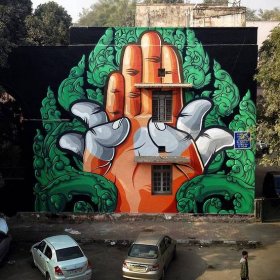 More than 20 artists from around the world have transformed the walls of a neighborhood in the heart of India’s capital with murals as part of an annual street art festival.

Organizers of the fourth edition of the “St+art” event in Delhi want to make Lodhi colony into a contemporary open air, public art gallery.

So far, artists have painted 12 massive murals and will be painting more in the days to come before the festival concludes at the end of February.

“Hopefully after completion this will fuel the growth of street art in India and will also open up the idea of choosing art as a career for the younger generation, ” said Hanif Kureshi, a New Delhi-based typographer and artistic director of “St+art” in Delhi.

The mural in the photo above is by a French artist who uses the pen name Chifumi.

His work explores hand expressions and he calls this one “Padma.” It is inspired by “padma mudra, ” an Indian hand gesture symbolizing a lotus flower.

Chifumi infused his design with hints of Khmer patterns from Cambodian art.

Florence Duran and Camilo Nuñez, a duo from Uruguay known as “Colectivo Licuado, ” have been creating visual art in public locations since 2010. The mural above is a result of their collaboration with another Uruguayan artist who uses the name Alfalfa. 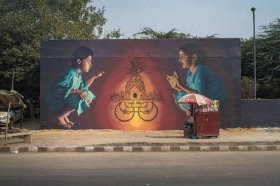 The trio painted the wall of a garbage-collection center in Lajpat Nagar, a neighborhood in south Delhi. The piece, they say, is inspired by “several elements, characteristics and people they found interesting in the city.”

They painted the words “This cart belongs to Chote Lal” (‘Chote’ is a hindi word for ‘little’) in Hindi script on the cart in their mural in tribute to the owner of the tea stall in front of the wall they painted.

In the photograph above, Florence Duran painted a part of the mural.

Swiss artists Pablo Togni and Christian Rebecchi came together in 1996 and called themselves “NEVERCREW.” They painted a bright-colored meteorite on a wall in the neighborhood with an astronaut perched on top and multi-colored rays shooting toward the ground.

“The astronaut atop the wall is a metaphor for someone who can see things from a different perspective, as a silent viewer of a larger picture, ” the artists explained.

The region of Shekhawati in the desert Indian state of Rajasthan is known for its tumble-down townhouses that are decorated with magnificent frescoes. Indian artist Mahendra Pawar and his team from Rajasthan have painted this ornate mural on one of the walls in Lodhi colony. In the photo above, a member of Mr. Pawar’s team can be seen painting the mural in the classic Shekhawati style. 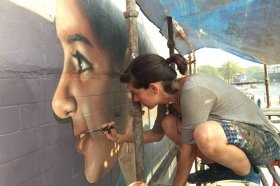 The mural as it looked when completed.

Niels Shoe Meulman from Amsterdam began tagging his art “Shoe” in 1979. Mr. Meulman calls his mashup of calligraphy and graffiti “Calligraffiti” and this is the first time he has used the script to display one of his poems in a mural. The black ripples were painted using brooms.

This is the poem.

And no words to read

No names in the streets

Japanese artist Suiko, seen in front of his work in the photo above, is one of the leading graffiti artists in his country. In his art, Suiko focuses on circular shapes, bold lines and vibrant color schemes. He called this one “The Lotus.” Suiko has riffed on India’s national flower with his signature curved lines and also integrated some Japanese characters.

The mural above adorns a garbage-collection center in Defence colony in south Delhi. Indian tattoo artist Arnab Sikder, who uses the pen name Horus, calls his piece “Garb Age.” He describes it as a subtle take on “consumerism and its effect on the world around us.”

“With growing consumption demands, the amount of pollution in the world is also increasing exponentially having an adverse effect on nature and animals that reside in it, ” he said.

For almost 10 years, Delhi-based artist Rakesh Kumar Memrot has been painting public spaces. Mr. Memrot has spent the past few years exploring Indian folk art. His mural in Lodhi colony is titled “Fusion Art.” It is inspired by Gond Art, a traditional tribal art form which comes from the central Indian state of Madhya Pradesh.

Australian artist Reko Rennie calls his piece in the photo above “Original Aboriginal.” Geometric patterns are typical to his style.

Amitabh Kumar is a designer and artist based in India. He painted this mural above called “Dead Dahlias.”

“This city [Delhi] is made of magic, which is now crumbling apart, ” Mr. Kumar said. “Through this intervention I’d like the viewer to catch its crumbling pieces.”