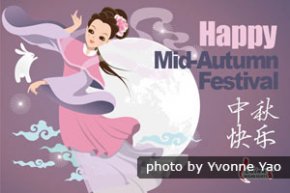 Mid-Autumn Festival is held on the 15th day of the eighth month of the Chinese calendar, which is in September or early October in the Gregorian calendar.

In 2015 it takes place on Sunday September 27th. Chinese people will have a two-day "public holiday" on the 26th and 27th — a normal weekend off for 5-day week workers, however...

When Mid-Autumn occurs at the end of September or early October its statutory day of public holiday is usually combined with the statutory National Day three-day holiday for a seven-day public holiday (October 1–7), sacrificing one adjacent weekend day ( for example, in 2015 people need to work on Saturday, October 10).

See below for how the date of Mid-Autumn Day varies in the coming years.

Why Mid-Autumn Is Celebrated When It Is

People in Yizhou, in South China's Guangxi Province are making preparations for worshiping the moon.

According to the Chinese lunar calendar (and traditional solar calendar), the 8th month is the second month of autumn. As the four seasons each have three (about-30-day) months on the traditional calendars, day 15 of month 8 is "the middle of autumn".

For the Full Moon

On the 15th of the lunar calendar, each month, the moon is at its roundest and brightest, symbolizing togetherness and reunion in Chinese culture. Families get together to express their familial love by eating dinner together, appreciating the moon, eating mooncakes, etc. The harvest moon is traditionally believed to be the brightest of the year.

Month 8 day 15, is traditionally the time rice is supposed to mature and be harvested. So people celebrate the harvest and worship their gods to show their gratitude.

Chinese Food festival in the city