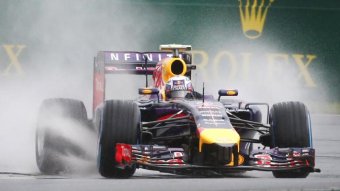 The Australian Formula One Grand Prix at Albert Park is one of the many March events. Photo David Caird

SPECTATORS will be marching into the city for a mammoth month of major events.

“Everyone loves March. This is about as busy as it can get, I think, ” Mr Doyle said.

“Last weekend felt really busy with White Night, Chinese New Year and various sporting performances, including the World Cup … but to be honest it is nothing compared to March.

“Any one of these events in a month is a very big deal. To have them all in the month of March is just amazing.”

Melbourne City Council estimates more than $60 million will be injected into the economy from Moomba and the food-and-wine, fashion and comedy festivals.

Australian Grand Prix Corporation chief executive Andrew Westacott said images of Melbourne would be broadcast to the world when the GP starts on March 12.

“Ticket sales for this year’s event are currently tracking above 2014 and we are working towards an estimated crowd in excess of 300, 000 people flocking through the Albert Park, ” Mr Westacott said.

“As always, police encourage people to attend these events and enjoy themselves, but do so responsibly, ” Ms Foulds said.

Premier Daniel Andrews said: “We are proud to be the sporting and major events capital of the world, and the bumper range of events in March proves this.