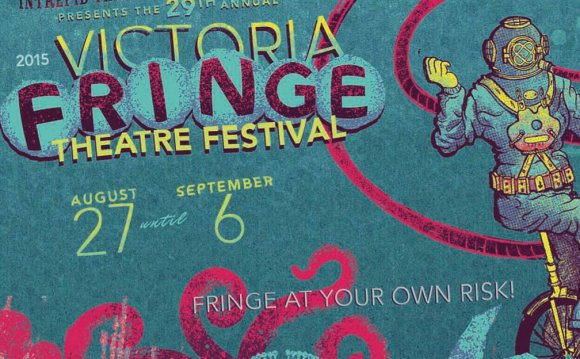 A Vancouver Island festival tradition for thirty years, Victoria Fringe Theatre Festival takes over downtown Victoria BC each summer for a 12-day celebration of live performance from around the world, featuring an eclectic mixture of spoken word, drama, musicals, dance, comedy, magic, theatre for young audiences and more.

In keeping with CAFF’s guiding principles, shows in the Fringe are selected at random (by lottery), are uncensored, accessible to all artists and audiences, and 100% of the ticket price you pay is returned directly to the artists you choose to see.

Everyone who attends the Fringe buys a membership button ($6), and then tickets are $11 or less at the door. Advance tickets are available (surcharge applies) as are discount passes for at-door tickets, available one hour prior to showtime.

This year’s festival will feature returning favourites, local showbiz heroes, and performers from across Canada and around the world, including Japan, Australia, the UK and the US. Stay tuned for the complete festival program, which will be released online in July and in print in August.

The complete Fringe Program will be available online in mid-July, and free print programs will hit the streets in early August. Can’t wait? Join our e-news list and keep up to date on things Fringe, and all of Intrepid Theatre’s great festivals and programs year-round.

Apply as an Artist or Theatre Company

Interested in bringing a show to the Victoria Fringe in 2016? We select participants by lottery in early January. Artists can read about applying for the Fringe here (Application Deadline January 12, 2016 ), or find out about the CAFF Touring Lottery (closed for 2016).

Wind in the Pines in the Victoria Fringe Festival