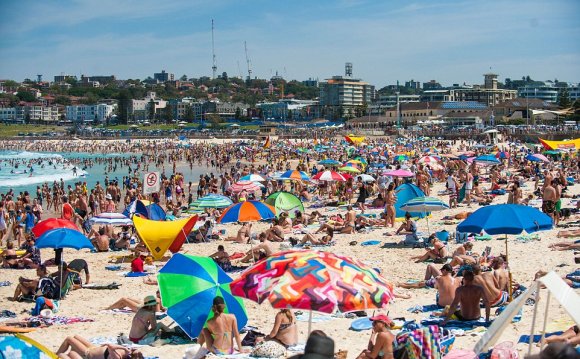 Weather affects everybody. Consequently it is of interest not only to residents of an area, but also to visitors. The following information is designed only as a general survey; one to give residents more knowledge of their environment and tourists an idea of what can be expected.

Melbourne enjoys a temperate climate with warm-hot summers; spring and autumn are balmy and mild, the winters cool. Melbourne is seldom unbearably cold or unbearably hot, temperature extremes when they do occur see the hotter realms of the thermometer causing more problems than the colder.

There is a reputation for rain in the city, which is statistically unfounded as Melbourne receives only 50 percent of the average rainfall of either Brisbane or Sydney. Perhaps it can sometimes be a little unpredictable, however, it is a comfortable environment to be in whatever the season. In fact it is a great place to watch the seasons change, they are so clearly defined and so highly visual within the many parks and gardens of autumn and spring, giving rise to all of natures spectacular beauty and charms within the confines of a great city.

Melbourne lays within the southern hemisphere where the seasons are reversed to those in Europe, North America and most of Asia. Melbourne’s changes of seasons are renown for starting late, the “official” first day of summer is 21st December, but it rarely feels like summer until mid January or even later. During the summer months outdoor activities in particular the fabulous Melbourne beaches are popular with both locals and visitors.

It is high summer in Melbourne during January and February, a typical day is warm and sunny with a freshening sea breeze arriving from the south in the afternoon. A few days are cool and cloudy, a maximum temperature below 20ºC being recorded about once a week. There are always hot days and the year's highest temperature of about 40ºC is usually recorded during these two months. Some of the hot days are accompanied by an unpleasant north wind, which can be quite strong. Mostly there are only one or two hot days in a row. Occasionally hot weather may continue for three or more days, when the daily appearance of that cool refreshing, north bound sea breeze in the afternoon, becomes that day’s most welcome visitor. The year's warmest night, with a minimum temperature of about 24ºC, is also recorded during these two months. Hot weather normally ends with an abrupt cool change when the mercury may fall by 10ºC in only twenty minutes. Some of these changes are dry and arid; showers and thunderstorms accompany others. High levels of humidity create discomfort on very few days, mostly towards the end of a hot spell. It is not uncommon for a fortnight to pass without rain. On occasions prolonged heavy rain can fall.

March is a transitional month between summer and autumn. Hot weather can be experienced in the first fortnight, when the month's highest temperature of about 35ºC is usually recorded; it may well be accompanied by a strong northerly wind during the day. The hot weather usually comes to an end with a sharp wind change to the southwest and a rapid fall in temperature. Humidity is uncomfortable on about one day only. Many days are mild and sunny although some days are cool and cloudy. A maximum temperature below 20ºC is recorded about twice a week. The afternoon sea breeze is not near as strong as in mid-summer. Nights are noticeably cooler than in the preceding month. Towards the end of March, it is quite common for the overnight temperature to fall below 10ºC on one or two occasions. The month is fairly dry however prolonged heavy rain, falls occasionally.