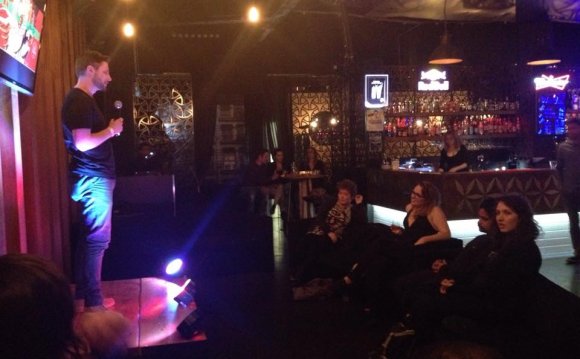 Madonna performs on stage during her 'Rebel Heart' Tour at Vector Arena on March 5, 2016 in Auckland. Photo: Cam McLaren/Getty

As 1500 of Madonna's most ardent fans prepare for her exclusive show at Melbourne's Forum Theatre tonight, many of whom have camped out overnight and throughout the rainy afternoon, speculation continues as to exactly what form the superstar's show will take.

The intimate Tears of a Clown show is a free performance for members of Madonna's fan club, described by the singer as "Performance art, comedy, storytelling and music" as a way of thanking her fans for waiting 23 years for her to tour here.

Ahead of her Rebel Heart stadium tour, the singer began dropping some seriously cryptic clues - if that's indeed what they are - on her social media accounts, including several clown references and some bizarre photos.

First there was this:

On Wednesday night some of her most die-hard fans, already camping outside The Forum Theatre, caught a glimpse of her as she showed up at the venue for a late-night rehearsal. One anonymously posted a set-list of the songs she rehearsed to the Drowned Madonna fan site while Madge's manager, Guy Oseary posted a photo from inside the venue of the singer rehearsing.

According to the anonymous fan, Madonna rehearsed nine of her songs, including acoustic versions of her two earliest hits, 1983's Holiday and Borderline, as well as later songs like I'm So Stupid, Nobody's Perfect and Intervention.

The fan said she rehearsed well into the night - but there was no mention of any overheard jokes.

While the lucky fan club members invited to tonight's Forum show already have their non-transferable tickets, it's believed the tickets are general admission, so people have been queuing up to ensure a good spot for the show.

Long-time fan Adem Ali from Geelong, has been in the queue since 7am Thursday morning "just in case" it's a case of first in, best spot inside the venue. 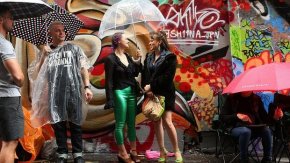 "We got here with our camper chairs and we're about 25th in the queue, " he old Fairfax Media. "It's a great vibe here and even in the rain everyone's really friendly and helpful, no insane arguments!"

Ali, 32, has taken annual leave from his job to attend all seven Madonna shows around the country. "Don't ask how much I've spent!"

He's been a member of Madonna's fan club for several years and was "beside himself" when he received the email telling him he'd been chosen for the exclusive gig.

"Even when I was in a highchair I was a fan - my mum tells a story about putting Holiday on the record player and I'd stop eating until the song ended, " he says.

Ali says even though he's been waiting 28 years to see his idol, he's not sure what to expect from tonight's exclusive show.

"I've heard they rehearsed a lot of different songs as she can't make up her mind, so it might be as much a surprise for us as for her band, " he says.

And as for the mooted stand-up?

"We have to remember that when she wants to be, she can very funny and witty."

If Madonna does deliver on her promise of comedy, it won't be the first time she's attempted it - last April the singer did a 'bit' on US chat show The Tonight Show with Jimmy Fallon, after telling Fallon she is "kind of a closet comedian".

"I always do extravaganzas, they always cost a billion dollars to make … nobody makes any money … and sometimes I dream about simplicity, " she said, before Fallon urged her to try out some material.

The host introduced her as as "an up and coming comedian from Bay City Michigan" before the Material Girl tried out some very different ... material.

Her opener was … just ok, announcing she was only going to "talk about what I know… so I'm going to start with dating younger men, " she said, before moving into jokes about her extensive modern art collection - a little harder for most of us to relate to.

She also told an anecdote about asking her 15-year-old son Rocco (from her previous marriage to British film director Guy Ritchie) if he had any single friends. A gag which, one imagines, given her recent estrangement from her son, won't be in tonight's repertoire.

At her Auckland show last week, the singer broke down on stage after dedicating her song La Vie en Rose to Rocco, telling the crowd, "there is no love stronger than a mother for her son" and "if I talk about him too much, I might cry".

Since then though, her Twitter feed has been a bizarre parade of clown-related photos, emoji and cryptic messages, the last one, sent in the early hours of Thursday morning, of the singer riding a miniature tricycle.