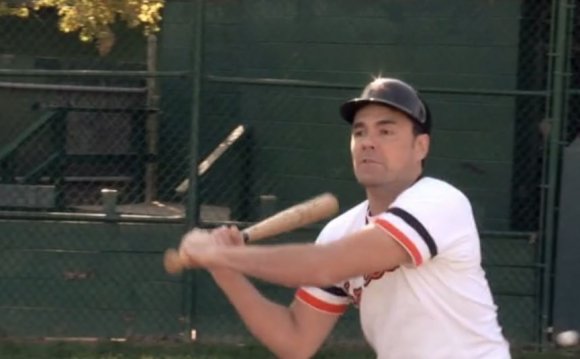 Bill Ripken played seven seasons for his hometown baseball team, led that team in hitting once (almost twice) and teamed with his brother, Cal, to form one of baseball’s best double-play combinations of the late ‘80s.

And yet, when a short film is made invoking his name, it’s all about some nasty words on a baseball card.

Ah, so fickle is fame.

“The Other Ripken, ” a six-minute comedy short centering on the infamous 1989 Fleer baseball card in which the knob of Ripken’s bat has a clearly visible obscenity written on it, will have its world premiere next month at the Cinequest film festival in San Jose, Calif.

Played strictly for laughs, “The Other Ripken” posits Bill as an ineffectual hitter whose only claim to lasting fame is that baseball card. (We can’t tell you exactly what was written on the knob of the bat, this being a family publication, except to say it was two words that begin with “F” and the second was “Face.”)

Actor Adam Way, whose credits include a 2004 episode of “Law & Order: Criminal Intent, ” plays Ripken, who is shown mostly swinging ineffectually at a number of pitches (that is, when the balls aren’t hitting him).

According to the film’s narrator (whose voice is provided by G. Love, of G Love & Special Sauce), Bill’s moment of glory came not on the field, but when the baseball card was released — and collectors all over the world started 1) snickering that such a bad word actually made it onto a card; and 2) buying up as many as they could, on the theory they’d soon become an invaluable collectors’ item.

The release of the card was “the greatest moment in the history of moments, ” or so says the narrator.

“It’s kind of like a modern-day folk story, ” writer-director Tim Carr says. “When I grew up, this was the craziest thing, that a guy wrote a bad word on a baseball bat.”

Ripken initially blamed the off-color inscription on a practical joke by his teammates. In a 2008 interview with Darren Rovell, then of CNBC, Ripken admitted he was holding a batting practice bat he had marked himself to make it stand out from the other bats. But he never meant to pose with it, and still finds it hard to believe no one at Fleer noticed before the cards were printed.

Carr, who grew up an Orioles and Phillies fan in Avondale, Pa., clearly finds the whole incident silly, and hopes the film’s audience agrees. “I mean, it doesn’t have to be this big, serious movie about this, ” he says. “Let’s just have a good time with what it was.”

He says he doubts Ripken has seen the film, and hopes he’ll take it in the good-natured spirit in which it was intended when he does. Ripken declined to be interviewed for this article.

For the record, it should be noted that Ripken’s career wasn’t nearly the object lesson in obscurity the film comically suggests. In his first season with the Orioles, the second baseman batted .308 in 58 games, and was credited with energizing a lackluster team. Three years later, in 1990, he led the O’s with a .291 batting average.

Ripken ended up playing in the majors for 12 seasons, no mean feat. And when he played alongside Cal while their father, Cal Sr., was managing the team, the trio ensured their place in history as the first pair of siblings to be managed in the major leagues by their dad.

(Bill Ripken also graced the cover of Sports Illustrated on May 2, 1988, when the Orioles were in the midst of an 0-21 season-opening losing streak. But the less said about that, the better for all concerned.)

Bill, who retired from the majors after a 1998 stint with the Detroit Tigers, is now executive vice president of Ripken Baseball, which owns and operates the minor league Aberdeen IronBirds. He also works as an analyst for the MLB Network. In 2002, he was inducted into the Maryland State Athletic Hall of Fame.

As for the card? After initial reports that it was rare (Fleer soon issued a new card, with the offending words covered over) caused its value to rise as high as several hundred dollars, it later was found that some 100, 000 or more were in circulation. You can find it on eBay for about $5. (Just don’t let your mom know you have one.)