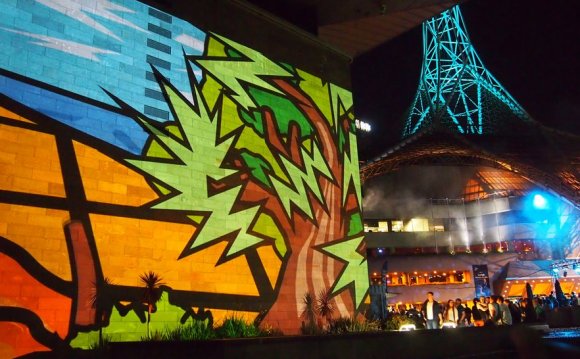 Victorian police were forced to use capsicum spray on a violent gang that rampaged through the city of Melbourne over the weekend, disrupting the city’s annual Moomba festival.

The rioters attempted to pick fights with festival-goers in Federation Square on Saturday night, with police saying a gang based in Melbourne’s southern suburbs, called Apex, was responsible for the riot. The Moomba festival is a family-friendly event that coincides with Victoria’s Labour day long-weekend.

The behaviour that began at about 8pm was “abhorrent and violent, ” said Victoria police’s chief commissioner, Graham Ashton, as people enjoying the festival were forced to run for cover in nearby buildings as gang members began to use chairs as weapons. One person was hospitalised.

Ashton said police had been monitoring Apex as part of Taskforce Tense, with the group allegedly responsible for a number of aggravated burglaries, motor vehicle thefts and assaults over the past year.

He said 33 arrests had been made in the past few months, with 20 gang members remanded in custody. Four additional people were arrested on Saturday night but Ashton said this number would “rise significantly” in coming weeks. Members of the gang were as young as 12, he said.

“We have good-quality CCTV footage and we’ll be making further arrests this week of ringleaders and other people engaging in this unacceptable violence, ” he said.

It was not the first time the group had been into the city looking to cause trouble, Ashton said, with the gang present during new year celebrations in the city and at the all-night White Night festival.

But a heavy police presence in the city on Saturday night prompted the group to escalate their violence, the commissioner said. There were 11 separate incidents throughout the city, he said, including assaults and robberies, and a police officer was also hit with an object.

“We’ll be moving to make sure those people are under arrest, ” Ashton said.

“They would go up to the top of the stairs and somehow there was something that sparked a stampede, ” he said.

“They just came running all the way down; it was really crazy there was like so many of them running towards us.

“All in all it was a very chaotic scene.”

He captured footage of the group knocking down a fence.

“There’s something very strange going on there that I don’t understand yet, but it’s something we all need to address.”

“We will be looking at how we police major events in the city somewhat different in the future, ” he said.

Extra police have been brought in to the city for the remainder of the Moomba festival, he added.

He also warned the about 100 youths involved in the riots that the CCTV footage police had obtained was extensive and of high quality.

“We have clear footage of who you are, ” he said. “Give yourself [up], go to your local police station, because we’ll come knocking on your door.”