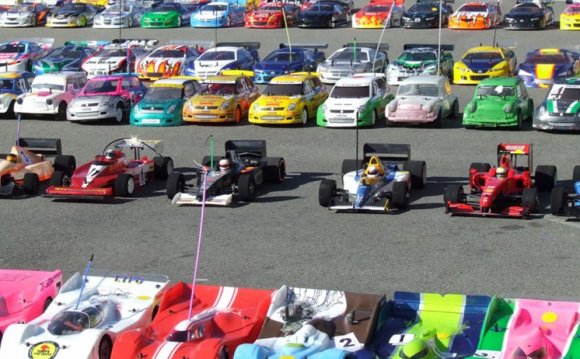 is a New Zealand-based motorsport category of touring car racing. Previously known as the New Zealand V8s and TraNZam Lights, it was founded in 1996. In 2015 it absorbed the V8SuperTourer field.

The New Zealand V8s category journeys to various race tracks around New Zealand. This series somewhat resembles but differs in many ways from the Australian V8 Supercars, primarily in terms of the level of technology. The NZ V8 series focuses on cost containment and control to make sure that the series is not dominated by one make or team. It is technically more basic than the Supercars, but also tends to be a bit more spectacular with a lot more close-action racing due to limited grip and braking capabilities. Unlike the Supercars, the NZV8 races are all sprint races so there is no requirement for elaborate pit crew setups. (In previous years a 500 km endurance race was run, but this has been dropped). The vehicles themselves are visually almost indistinguishable from Supercars, and grids are typically 25 to 30+ vehicles in size. A number of Australian Supercars drivers now race in the NZV8's such as David Besnard, Luke Youlden and Cameron McLean for example, as the series has come to be recognised as an outstanding class in its own right, rather than a poor cousin of the Australian V8 Supercars. Supercars teams have previously been involved; Team Kiwi Racing has run two-car teams in the series in the past as a development ground, while Tasman Motorsport has been running a single car team with Andy Booth driving (Holden Commodore) since the 06/07 season.

The winner of the 2005/2006 season was Kayne Scott driving a Holden Commodore, who took the trophy after a controversial season that initially saw Angus Fogg (Ford Falcon) awarded the trophy, only to lose it in the court room. The 05/06 season saw Fords dominating for the first time, and there were loud cries of lack of parity from the Holden teams. It was clear that the Falcons had a considerable edge over the Holdens in power in the low and mid-range, so significant that MSNZ changed the rules and allowed the use of a carb spacer on the Holdens to shift their torque curve. This saw an improvement in the competitiveness of the Holden teams, with Holden driver Kayne Scott dicing for the championship lead. However, Andy Booth was the only other Holden driver consistently in the top-ten, and the Falcons continued to dominate in general. The series was ultimately won in convincing style by Johnny McIntyre in a Ford.

The 07/08 season has seen a dramatic shift towards entries from Ford teams, with Fords outnumbering Holdens by nearly two to one, and many existing Holden-based teams switching to Ford, including former champion Kayne Scott. This is a direct result of the perceived lack of parity over the last two seasons, with the Fords being significantly more competitive. However, any disparity between the two camps is questionable after the first round of the 07/08 season at Pukekohe; John McIntyre (Ford) produced a convincing opening round win, but was dogged all the way by Andy Booth (Holden) who was clearly equal in performance and handling. That said, former champion Paul Manuell was the only other Holden to finish the round in the top 10.

The 07/08 season also sees a reduction to six rounds in the championship. A seventh round is still run in conjunction with the New Zealand round of the Australian V8 Supercars, but due to a conflict in television broadcasting rights it no longer forms part of the NZ competition series, and is instead treated as a separate trophy round. The 07/08 season also sees former V8 Supercar driver and two-times FIA World Touring Car champion Paul Radisich, driving a Ford Falcon in the series.

The season was a neck and neck battle between Ford BA Falcon drivers Kayne Scott and John McIntyre, with Scott winning the title by a mere 9 points. Third was versitel driver Craig Baird.

The season again was a close battle. This time Craig Baird came out on top from John McIntyre. McIntyre had nightmare meeting at the fourth round at Timaru failing to finish any of the three races. Baird won by 75 points. Third was defending champions Kayne Scott.

The season was boiled with controversy. Kayne Scott was stripped of his first six rounds points for technical infringements, as was visiting Australian V8 Supercars driver Jason Bargwanna at Ruapuna. Scott and his team were livid with the ruling which handed the title to John McIntyre with Craig Baird runner up and Andy Booth in third.

This article is outdated. Please update this article to reflect recent events or newly available information.

"Fastest car in the world" vs Yacht - New Zealand Race ...