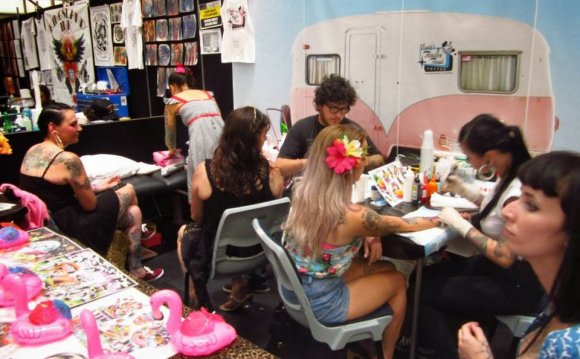 Kelley, a modern day pinup icon and judge on the American tattoo TV show “Best Ink” who was a hit with visitors and a celebrity tattoo judge at the 2013 event, says she is so excited to be heading back to New Zealand for the NZ Tattoo & Art Festival.

“I had such a great time last time I came out, that I couldn't wait to come back, ” says Kelly.
“There were so many incredible tattoo artists at the convention and all the people who came out for the convention were so polite and fun. This year I get to tour around New Zealand for a little bit, so that will make the trip even more special!”

Also returning to the festival running over November 28 and 29 at New Plymouth’s TSB Stadium is UK-based fire-dance performer, Cervena Fox, along with one of New Zealand’s most respected international tattoo artists, Dan Smith, who starred in the TV show “LA Ink”.

New to the festival this year will be Swedish tattoo artist and model Cleo Wattenstrom, American model Miss Mary-Leigh Maxwell and Bernadette Macias - who is a judge on CMT’s Tattoo Titans as well as being the face of Sullen Clothing and a host on Sullen TV.

Now in its fifth year, a key attraction for the 8000 visitors expected to attend this year’s festival is the opportunity to get a tattoo from one of the world’s best tattoo artists.

With over 250 tattoo artists coming from around the country as well as Australia, Japan, North America, Russia, the United Kingdom and Europe, the festival is Australasia’s largest tattoo event and continues to attract super stars says festival organiser, Brent Taylor.

“New Zealand tattoo artists such as Dan Smith are hugely respected in the international scene and have been influential in raising the mana of kiwi tattoo art and attracting international artists to the festival, ” says Brent.

“Our festival is a chance for tattoo lovers to see the finest tattoo artists in the world create their work.”
Outside the buzz of seeing tattoo artists of every style imaginable at work from traditional indigenous artists to the world’s best contemporary artists, visitors will be able to enjoy two-days packed with high quality entertainment.