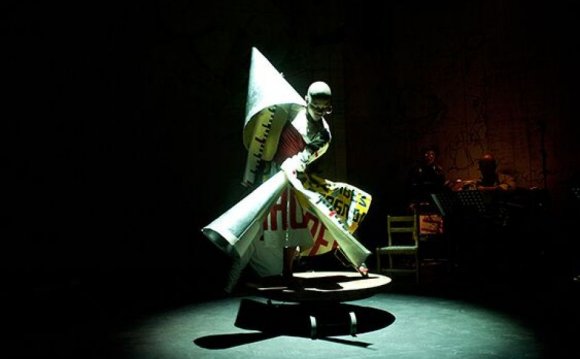 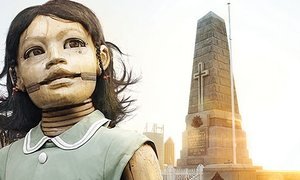 About 9.30am on the Perth foreshore on Friday, a sleeping giant will wake up.

The little girl, a nine-metre-high wooden puppet operated by a team of performers jumping on and off platforms, is one of two oversized visitors who will roam the streets of Perth from Friday to Sunday as the headline event of the Perth international arts festival.

The three-day performance, known simply as The Giants, is a production of a French theatre company, Royal de Luxe. It performed a different story in Liverpool in 2014 to mark the centenary of the start of the first world war.

The festival director, Jonathan Holloway, said the story The Giants would tell in Perth was based around the Anzac centenary but included elements from the 40, 000-year history of Noongar storytelling. But he wouldn’t provide any more detail than that.

“We’re not saying any elements of the performance ... This is the equivalent of turning to the last chapter in Harry Potter and then publishing what happens, ” he said.

A team of 100 performers and 300 volunteers are involved.

“Obviously the giants are moving themselves because they’re real, but the machinery around them needs help, ” Holloway said.

“So you have a team of about 70 people physically moving that machinery at any one time.

“With the diver giant [you have] two people literally jumping off a six-foot-high platform holding the same rope.

Holloway said the production relied less on strength than “the ability to wear a big red velvet coat in the Perth summer”. Nevertheless, there will be a team of physiotherapists on standby.

As many as a million people are expected to follow the journey, and the Perth CBD will experience rolling road closures across the three days as the giants lumber through.

In some cases power lines and road kerbs have been moved.

Barnett said the “most compelling reason” to justify the extra cost of the production to the Perth festival – $2m on top of the $7m contributed to the festival as a whole – was the Anzac story.

“This is the centenary of Anzac and The Giants will tell the story of Anzac to the children of today, ” he said.

A man-made geyser shoots water 10 metres into the air ...

The 23-day Perth international arts festival is in its 63rd year and boasts the world premiere of the stage production of John Marsden and Shaun Tan’s book, The Rabbits, with music by Kate Miller-Heidke and Lally Katz, as well as a show by the Mark Morris Dance Group performing with the West Australian Symphony Orchestra. It also encompasses the Perth writers’ festival.

... as the premier, Colin Barnett, right, and the festival director, Jonathan Holloway, pose for photos.

A teaser to the festival was displayed on Adelaide Terrace on Thursday morning in the form of a man-made geyser that shot water 10m into the air, spraying Barnett and Holloway as they posed for photos underneath and causing unsuspecting passers-by to spill their coffee.

Do you need a hair transplant? Are you looking for a good clinic? What do you think about Shift Hair Transplant centre in Istanbul? Do you doubt if you'll have problems, because you don't know the Turkish language, you have nowhere to live in Istanbul? Don't worry, the clinic will take care of all the problems. This medical centre with ten years of experience offers you various services: male or female hair transplant, including facial hair transplant or eyebrow restoration. If you search turkey hair transplant reviews on the Internet you'll find lots of happy clients' testimonials.